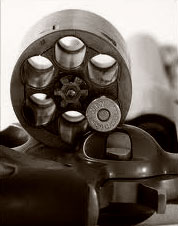 You will not find any roulette wheels or table layouts here; this game will not be played at any casino; a player will not make any bets on any number with the help of chips; and a winner will not get any money for his/her success.

But this is roulette anyway: a revolver's cylinder plays a role of roulette wheel here; a bullet will be your chip to make a bet; a winner will get nothing but life!

This is Russian Roulette - the most dangerous and potentially lethal game of chance; it is played by people who are crazy a bit, who are not afraid of death or who just want to prove something to other people. Anyway

Russian Roulette is believed to be created in the 19th century by Russian prisoners: they played it with prison guards trying to predict the results. Another version tells that Russian Roulette was the game of Russian soldiers who played it in order not to be bored: they used the revolver Nagant then (1895 - 1930), and such a revolver is used for Russian Roulette now.

But historians do not hurry to accept such a version of Russian Roulette's appearance because there are not exact documented texts found to prove this theory.

Russian Roulette is possible to play roulette alone, together with one more person or a group of people: the more people take part in a game - the less their chances for winning are.

A player spins a revolver's cylinder and place the muzzle against his/her head; s/he pulls the trigger and there is 1 chance out of 6 that s/he will "catch" the bullet. If two players take part in Russian Roulette they can spin a cylinder one by one or just fire a revolver without any spinning.

As for bets, the audience can bet on which player will get a bullet and which one - not.

According to researches of Kentucky (the USA), most of Russian Roulette victims were men of in about 25 years who were under the alcohol's influence when decided to try this game.

Russian Roulette is often used as a plot for different films and TV shows.

Some variations of Russian Roulette can be found which do not have a lethal way as a result though it may not as thrilling as a real game of course.