Wheel Of Fortune: Colorful and Exciting 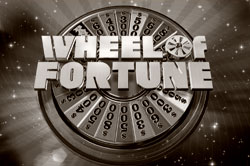 Roulette wheel is used for many different games today, and it gives every roulette admirer one more chance to try something new without changing his/her passion for a new field. These games include TV shows, such as Pole Chudes for example, and casual games, such as Drinking Roulette or something.

Here we are glad to represent you one of the most popular TV shows where a roulette wheel is used in rather unusual way - Wheel of Fortune!

Today Wheel of Fortune is considered to be the one of three longest TV shows since 1984 and the one of the most successful ones. It was first introduced in 1975, and a creator was Marv Griffin; since that time (the show became on air in 1982) Wheel of Fortune has changed many hosts, and today this show is presented by Vanna White and Pat Sajak.

Originally, the goal of the game was to solve a word puzzle: six players tried to do that by spinning a big colorful wheel which had many different prizes possible to win by players.

Originally, a winner of Wheel of Fortune had a right to change all his/her points for different presents: every present had its price and the most expensive and most desirable were cars of course. But this tradition has ended later.