The History of Roulette Game's Appearance and Development 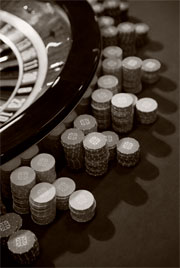 Everybody knows that roulette game was always associated with a devil because of religious superstitions concerning the number of 666: the sum of all numbers possible to find on roulette wheel is exactly 666 - that is why roulette was always considered being one of the most mysterious and superstitious casino games.

The legend is that two brothers, Francois and Luis Blanc, who founded the Monte Carlo casino, had sold their souls to the devil in order to reveal all the secrets of roulette; and thanks to this fact they invented a single-zero roulette in 1842. Well, as far as you understand, this fact has no exact proves and it is possible to find more realistic variant of roulette appearance.

As we know, the main and most important part of roulette game is a spinning wheel: it is impossible to imagine this game without this magnificent attribute. So, the idea to use it for gambling appeared a long time ago, at Greco-Roman period: marked shields and arrows were used for this purpose.

Chinese people used wheels as a gambling element of their tortures: there were two wheels of different sizes and a victim was fastened between them; bets were made on which of those two wheels would be faster.

It is easy to guess that "roulette" is a French word: it means "small wheel", and all historians believe France to be the motherland of modern roulette. It had happened in 1655, and the inventor was Blaise Pascal, the mathematician who worked on his perpetual motion machine then; actually, a roulette wheel was the result of his attempts to create that machine. Roulette is believed to be played by French monks first (the end of the 17th century) but soon it was also possible to find in Paris casinos.

However, the version is that the roulette game of those times was also possible to observe and play in Italy (the game of spinning wheel named Hoca) and England (the game named E-O). It is actually difficult to say how European Roulette had been developed from the games of Hoca and E-O because it was already very popular and loved in France and the whole Europe in the end of the 18th century. Thanks to its additional options, European Roulette had also replaced E-O in England at the beginning of the 19th century.

Well, America should definitely be thankful to French people for the big variety of online casinos games, including roulette: French immigrants have brought roulette casino game to the USA in the end of the 18th century. New Orleans was the capital of gambling then, so, roulette first appeared there and was spread to many other American cities afterwards. It should be noticed that American Roulette was a little bit different from its European brother: it had other rules and design.