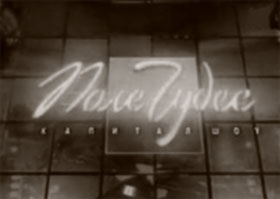 "...In the Land of Fools there is a magical field, called the Field of Wonders... Dig a small hole there, say 'Krex, fex, pex' three times and put a golden coin in the hole, then cover it with soil and sprinkle it with salt, water it well and go to sleep. Next morning a small tree will rise from the hole, but instead of leaves it will have gold coins... "

Probably, this fairy-tale had given the name for a Russian version of Wheel of Fortune which is called to be Pole Chudes (the Field of Wonders if to translate the name into English): the concept of the game is the same with its American variation but some small differences are present of course.

This TV-show had been extremely popular in 1990s but the 21st century did not leave pole Chudes without any attention too. The host of this show was Leonid Yakubovich assisted by a model and PR manager Rimma Agafoshina.

The goal of a player is to guess a puzzled word and get as much points as it is possible with the help of horizontally located big wheel which determines the prizes a contestant can receive.

One game consists of 3 rounds and a final: 3 people take part in each round and a final is played by 3 winners of 3 previous rounds. The winner of a final has a choice whether to play a super-final or not: s/he can refuse and take all his/her won prizes or have a risk to get something more or lose everything.

0 - it is like "Lose a Turn": all points won stay with a player but the next player gets a chance to spin a wheel

Chance - a player can call to any viewer and ask him/her for help: this viewer can call the word itself or just a letter; if the answer is correct, the viewer gets a prize and a player becomes a winner.

X2 - if a player guesses a letter, all his/her points are doubled.

Bankrupt - a player loses his/her points and the next player spins the wheel.

+ - a player has a right to open one letter.