Basics of the American Roulette 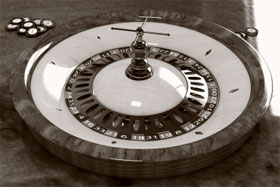 Roulette is the third most popular casino game after slots and blackjack. It has three variations the French, American and the European roulette. The American roulette was introduced in the United States at the end of the 18th century by French immigrants who were fleeing the French revolution. The game received a cold welcome because of the low house edge which forced operators to increase an additional 00 to bring the house edge to 5.26% from 2.70%. It wasn’t only zero; earlier versions had a United States eagle as a symbol, further raising the house edge to 12.90% through the present versions have the double 00. The American roulette has 38 pockets each marked with a number starting 0 to 36 plus an additional slot of 00. Therefore, the total count of all possible slots that the ball can land is 38. Number 1 to36 are marked in either red or black and the zeroes are marked in green which means players can even bet either red or black. Since the numbers 1 to 36 is a combination of even and odd numbers the players can also bet on the even/odd numbers. Other bet types are detailed in the below section.

How to play the game

There are two ways of playing American roulette, either online or on brick and mortar casinos. The two have the same set of features such as payout, house-edge, and gameplay is the same. The game starts with the players exchanging their cash for casino chips. Each player on a specific table will have a different colour of chips from another player to distinguish each player’s bets. Then the croupier invites players to place their bets on the table. Players have the option of placing either inside bets or outside bets. After the players have placed their bet, the dealer will turn the wheel on one direction and spin the pill/ball in the opposite direction. The ball will make several revolutions before the ball lands on one of the 38 numbers. The pocket that the ball lands will usually have multiple winning inside bets such as:

For the outside bets the player can place the following bets:

Each of these bets has different payouts, but generally, inside bets have a higher payout than outside bets because they also have a low winning probability. The online version gives gamblers a chance to play for fun/free or for real money which is unheard off in land-based casinos.

American roulette just like its other variations is a game of luck. There is no skill involved in determining the winning and losing numbers. Another interesting fact is that the numbers sum up to 666 hence sometimes referred to as the “the devil’s game.”

American Roulette is one of the most popular casino games today: it is possible to play both at land-based casinos and online; together with European Roulette, this roulette variation is considered to be classical. Let's have a closer look at American Roulette in order to understand how to play it and whether it can be the best choice for you.

American wheel and table layout are practically the same with European Roulette with the only one exception: American roulette game has one extra green spot - 00; it was added by Americans in order to increase a house edge. Because of this fact, American table layout also has 00-cell to bet on and 38 slots as a result.

Another difference of American Roulette wheel is the fact that its numbers are located in pairs opposite of each other (they are randomly placed in European wheel).

Roulette bets are also the same for both American and European roulette variants: you can make inside and outside bets choosing the option you like: straight bet, line bet, color bet, even/odd bet etc.